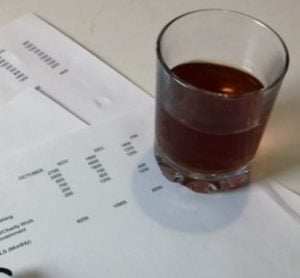 Accountants in trouble with addiction can wreak havoc upon a business, on themselves and on their families, but recovery is certainly possible.

Members of the Accountancy profession often work in positions of responsibility and trust, so that when a financial officer such as a senior accountant, has an addiction problem, the consequences can be dire for the business, and criminal activity may be found too. In 2013 the Chartered Accountants Benevolent Association (CABA) reported survey results* showing that around 30% of accountant participators admitted to a drink problem. There is little evidence that things have changed since then.**

Addiction can show itself as alcoholism, abuse of other drugs, or behavioural addictions such as gambling, pornography or even shopping. Addiction is always nasty, but recovery is certainly achievable and help is available from a number of sources both within and outside the professions.

Accountants and Gambling
Perhaps because of their familiarity with money, accountants have an above-average leaning towards gambling, an addiction where the consequences are often swift and terrible. Here is an example, based on an actual press report:
Accountant funds gambling addiction with fraud –
A company accountant has admitted stealing more than £500,000 from a quarry and tarmac company to fund his gambling addiction. Jeremy McLennan (not his real name) pleaded guilty to 36 other fraud charges. He was a popular local figure in the community. The Judge informed McLennan that although he had a good record, he now stood the risk of a custodial sentence.

Bad Habits at Work
But gambling aside, some accountants, thirsty as well as thrifty, get into the habit of having a ‘second office’ around the corner, where a certain amount of business is done perhaps, but the main emphasis is on pints, or stronger stuff. As one former city financial executive put it to me recently:
“I was a manager at that time and promoted the idea of ‘work hard, play hard’. Playing hard included long lunch hours in the wine bar. But if you’re a chartered accountant and drunk half the time, then you can’t even add up properly. Your work, in the form of financial statements, is there to be judged and you are there to be judged too and, in my case, found wanting. It’s a recipe for disaster.” Life went rapidly downhill. He was confronted by employers and sent to a rehab. And then to another. He attended several clinics and was hospitalised twice with liver failure – but still he merrily told himself he could stop when he wanted to. Eventually he hit rock bottom.
“I was without a job and a family, living in one room with a lot of empty whisky bottles, drinking two bottles or more a day. My wife had almost washed her hands of me, but she was the one who came to check up on me and drove me to one last rehab. Luckily, I finally got the message and have now been sober thirty years.”
The story is by no means unique – It is not difficult to discern addiction in the financial world and accountancy can be a fertile breeding ground.

The Stigma of Addiction in the Profession
As with most leading professions, Accountants tend to be members of relatively small professional bodies, which serve to give them status through training and support but also impose strict regulation. They presume there is going to be a stigma attached to any member found to be bringing the profession into disrepute through addictive behaviour. This means that members struggling with drink or drugs or gambling problems will be reluctant to come out and ask for help. Nevertheless, if they do, there is help on hand. GP’s will make referrals to appropriate treatment which might include a residential stay, day-care or individual counselling. Professional bodies do have a benevolent side as well. The Institute of Chartered Accountants in England and Wales (ICAEW) for example, provides strong and sympathetic support to members struggling with addiction (or indeed many other serious problems) through the Chartered Accountants Benevolent Association (CABA) which may even include financial help towards the cost of treatment.

Self-help Organisations
In addition, there is the well-known and highly successful network of self-help organisations such as Alcoholics Anonymous (AA) Narcotics Anonymous (NA) and Gamblers Anonymous (GA). These ‘Twelve Step’ organisations offer support round the clock in nearly all countries in the world – help is freely given on a totally altruistic basis. Many successful businessmen owe them a great debt. Here’s an example:
George Williams (not his real name) is a partner in a prosperous accountancy practice. He is also a member of Alcoholics Anonymous (AA). George’s addictions very nearly brought him to disaster and it was only an intervention by colleagues followed by a rigorous programme of twelve step meetings (ninety meetings in ninety days is often recommended to beginners), that saved him. Ten years after the intervention, he is still vigilant. Every week he attends his local AA meeting. The members there, through their example and friendship, have become his support and inspiration. He knows that if he ceased to attend, he could well return to a world where he could not pass a pub, where his professional life would be unmanageable and his private life and finances unsupportable. He’s not quite sure how the magic of AA worked on him so beneficially but he certainly doesn’t want to change a winning formula.

Dual Diagnosis
It is common for people who are addicted to suffer from more than one mental health issue at the same time, such as depression, anxiety or ADHD (Attention Deficit and Hyperactivity Disorder). Accountants are no different. This is called dual diagnosis, and it is important to address each mental health problem concurrently if the addiction is to be effectively treated long-term. Such cases may be difficult to treat on a day-care basis and a residential stay is normally recommended. The treatment programme will be tailored to the needs of the person.

Gambling and Cross-Addiction
Gambling has increased in popularity, largely due to the internet, so that today it can be done in privacy using the home computer and a credit card. This gambling explosion has led to a corresponding increase in addictive behaviour. In the world of finance as well, where activities such as day-trading or currency trading take place, the line between investing and gambling is often blurred and pure gambling increasingly happens. Quite often gambling will result in cross-addiction or dual addiction problems. Thus gambling can appear as an addiction after a person has successfully stopped some form of substance abuse. Here is a recent example;
Stuart is a Chartered Accountant who struggled for many years with alcoholism before entering treatment and successfully achieving sobriety for a period of seven years. He had always enjoyed sports like football and got into the habit of having a bet on big matches. Without realising it, his bets gradually increased to several hundred pounds a week and his losses started to increase too. He was starting to spend a lot of time on the activity and getting a real buzz from the excitement. Because of his past experience with alcohol, he was able to recognise the danger of one addiction being replaced by another. He took strong action (blocking gambling sites from his computer, handing his finances over to his wife to control). Others have not been so fortunate.

Ego Factors in Addiction
For some people, and accountants and other professionals are prone to this, their pride will not allow them to seek help for addiction via the GP or AA route, even if they do admit to a problem. Denial is a common factor in most addictions and this can lead people to continue battling with their egos as well as their addiction, for far too long. Denial is the device the ego comes up with which enables people to repeat unacceptable behaviours regardless of negative consequences. Eventually they are brought to a rock bottom that is so severe that only the most rigid denial could ignore it, at which time specialist residential treatment is probably required.

Seeking Treatment
If you think that you, or someone you love, struggles with addiction, you should consider treatment options as soon as possible. As already stated, accountants in trouble with addiction can wreak havoc upon a business and they can be very good at covering their tracks. Even if the business does not suffer, the individual and their close family and friends most certainly will. Addiction is a progressive illness and the symptoms are unpleasant. Ultimately it can kill.

An assessment by a trained therapist will be able to determine if there is a serious problem, and where so, the most suitable treatment. Individual counselling, day-care or residential rehab are possible routes to consider. Doing nothing can never be an option.

Christopher Burn (FCA).Chris Burn is a Writer, Psychotherapist and Chartered Accountant. His daily website www.poetrychangeslives.com
promotes the idea of change through an awareness of poetry, history and spirituality – subjects that are fast disappearing from many school curricula. His books – Poetry Changes Lives and The Fun We Had, show how life should be enjoyed. Chris is married with three children and lives in London and the Scottish Borders.

This article was first published on the website of Castle Craig Hospital, a leading British clinic for the treatment of addictions: www.castlecraig.co.uk