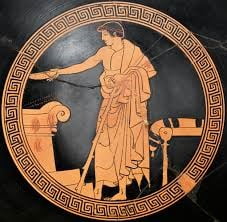 In ancient Athens there was a famous shrine ‘to an Unknown God’ (Ἄγνωστος Θεός).

St Paul saw this when he visited Athens in AD 51 (1) and he proceeded to berate the Athenians for their (as he saw it) ignorance and sloppy religious attitude. It gave rise to one of his most famous sermons in which he set out to define the meaning of his Christian God, whose word he was preaching with all the zeal of his recent conversion.

Many people now, take the opposite view to Paul, (as many did then): the Athenians were not ignorant and sloppy – their idea of deity and religion was in fact direct and existential, based on respect and personal responsibility: live your life as best you can and ask for help when you need it. The idea of original sin, guilt and redemption would have been quite alien. Hardly surprising then that, according to St Luke, many Athenians laughed at Paul’s sermon. The ancient Greek religion was simple, eclectic and mostly non evangelical; in fact very relaxed and civilised.

On the other hand, the great philosopher Friedrich Nietzsche had this to say about Christianity (2) – he makes it sound more like torture than divine guidance:
‘The Christian faith is from the beginning sacrifice: sacrifice of all freedom, all pride, all self-confidence of the spirit, at the same time self-mockery, self-mutilation.’

The Athenians in AD51 had barely heard the word ‘Christianity’ let alone ‘Nietzsche’ (lucky them), but they knew what they wanted – how to deal with life, and their philosophies of Stoicism, Epicureanism and the like were designed for this purpose. Deeds in other words, not dogma.

The Ancient Greeks often remind me of AA. Their grasp of the essential truths; their refusal to compromise; and of course the Delphic Oracle with its famous slogans ‘water is best’, ‘nothing in excess’ and ‘know thyself’.

When they dedicated a shrine to an Unknown God, they were in effect acknowledging the existence of a Higher Power in their lives which defied exact definition through its very nature. They were happy to accept the reality of the power without feeling the need to cloak it in religion. The power, in other words, was the important thing, not the religion. One can imagine them shouting out the AA slogans to Paul – ‘keep it simple’, ‘first things first’, ‘how important is it?’

A lot of recovering addicts have this ‘Unknown God’ – they call it ‘A Power Greater than Themselves’ and it serves them well, as it did the Athenians.
The truth is that nobody knows God in an empirical sense. How can we possibly? Just a look at our corner of the Universe should tell us that it is beyond belief. Billions of light years separate us from some galaxies but we can’t even be sure that our concept of distance, time and space is right. It is as they say, beyond belief. It all puts me in mind of that mysterious poem of Ralph Waldo Emerson (3):
…Far or forgot to me is near;

Shadow and sunlight are the same;
The vanished gods to me appear;
And one to me are shame and fame.
They reckon ill who leave me out;
When me they fly, I am the wings;
I am the doubter and the doubt,
And I the hymn the Brahmin sings…..

Very few things for me have been a consistent power for good over the entire course of my lifetime.
AA is certainly one, perhaps the only shining example that I know, whereas the various world religions sadly, have not been so.
Someone once said that, considering all the religious sects and beliefs there are, that they hoped God had a sense of humour. I hope so too. I wish more people did as well. Particularly religious ones. Exploring spirituality is fascinating, exciting and even amusing at times; exploring religion these days, is not.