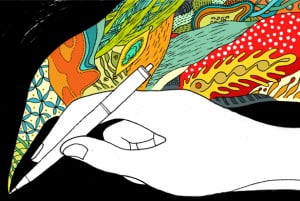 And it was at that age … Poetry arrived…
….and I, infinitesimal being,
drunk with the great starry void,
….I wheeled with the stars.
(Pablo Neruda)

Many poets, great and not so great, have suffered from addiction to mood altering substances – Coleridge, Rimbaud and Dylan Thomas (‘the Rimbaud of Cwmdonkin Drive’) spring to mind. Many great poems have been written about addiction too. It seems however that very little attention has been given to the addictive power generated by the act of writing poetry itself.
One thing is for sure – poetry has a power to alter our mood – not normally in the pernicious or directly physical manner of say, a line of cocaine, but in a pervasive and generally enjoyable way that can usually only be helpful. This mood changing effect can come from either reading or writing poetry but of the two, it is poetry writing that is the most dramatic.
Poetry’s a mere drug, Sir. (Restoration playwright George Farquar.)*
Writing poetry may not affect a person’s life with the degree of powerlessness and unmanageability that say, alcohol does, but it can still have a very marked influence.
The following is a transcript from an interview with Australian poet Les Murray**:
It’s wonderful, there’s nothing else like it, you write in a trance. And the trance is completely addictive, you love it, you want more of it. Once you’ve written the poem and had the trance, polished it and so on, you can go back to the poem and have a trace of that trance, have the shadow of it, but you can’t have it fully again. It seemed to be a knack I discovered as I went along. It’s an integration of the body-mind and the dreaming-mind and the daylight-conscious-mind. All three are firing at once, they’re all in concert. You can be sitting there but inwardly dancing, and the breath and the weight and everything else are involved, you’re fully alive. It takes a while to get into it. You have to have some key, like say a phrase or a few phrases or a subject matter or maybe even a tune to get you started going towards it, and it starts to accumulate. Sometimes it starts without your knowing that you’re getting there, and it builds in your mind like a pressure. I once described it as being like a painless headache, and you know there’s a poem in there, but you have to wait until the words form.
Many poets talk about the dream-like trance that envelops them during the act of creating poetry and how this can last sometimes for days. This is not a simple cathartic event, which can happen too, but a state that affects mind, body and spirit. Here is poet and author Robert Graves on the subject:
No poem is worth anything unless it starts from a poetic trance, out of which you can be wakened by interruption as from a dream. In fact, it is the same thing.***
All this trance-like sensation sounds to me a bit like the effect that certain mood altering substances can have, and we know how addictive they can be.
Is writing poetry an addiction in clinical terms? It would certainly appear to meet at least some of the DSM IV criteria for the diagnosis of addictive disease such as;
• Persisting with the habit to the detriment of other activities and relationships.
• Increased tolerance
• Unsuccessful attempts to stop
• Increase in time spent on the activity.
• Persisting with the habit despite knowledge of negative consequences.
It seems to me that there is enough anecdotal evidence to indicate that for some people, poetry, in particular the act of writing poetry, is a powerful and addictive behaviour that meets at least a few of these DSM IV criteria. Perhaps it’s not so surprising that Sigmund Freud said:
Everywhere I go, I find a poet has been there before me.****

Problem gamblers often talk of the trance-like state they get into when for example, playing slot machines; reality and awareness of the world around them disappears and everything is focused on them to and the moment. As in poetry writing.
Poet JLS Carter describes poetic creation as:
An addiction – you can go for days thinking of nothing else, in a kind of trance where all other thoughts and considerations are sidelined. That way madness lies. I have suffered physical damage due to the poetic trance obsession. By abandoning my routine of bathing at a regular time, I upset the plumbing of my boiler which subsequently went on strike in protest at my neglect of it. In addition, I recklessly cancelled appointments that got in the way of my writing bug.*****
By its very nature, poetry puts a special power into words that affects us in a way that most conversation or written narrative does not. Poetry gets under our skin, alters our moods and stays in our head in a special way. As TS Eliot put it so elegantly******
Footfalls echo in the memory
Down the passage which we did not take
Towards the door we never opened
Into the rose-garden. My words echo
Thus, in your mind.

It is generally agreed these days that poetry has a recognised place in the therapeutic array that can be deployed in the field of psychiatry, and many people have benefited from this when coming to terms with bereavements and other traumatic events. Indeed poetry therapy can be used as a technique in recovery from addiction. Expressing feelings can somehow become easier within the framework of a poem – perhaps it helps bring emotions into focus.

In short, writing poetry can be a real force for change as well as cathartic – (can one become addicted to catharsis too, I wonder?)