Still don’t know what I was waiting for…. I was 4 when I discovered Hunky Dory in my big brother’s record collection. It was an explosion – this record spoke to me and I’d never experienced anything like it. Every day I’d put it on and leap all over his bed to Changes. My brother was at school and it remained my secret, as I knew I’d be murdered for touching his stuff, but I couldn’t help it. As it happened, he was pleased to discover he had a fellow Bowie fan under the roof, and made me a cassette copy that became my most treasured item. Soon afterwards I discovered the fairy story film and masterpiece “Labyrinth”. It was then I knew I’d found my life long hero. The Goblin king was an all powerful lycra clad superstar; I worshipped him and I wanted to be Sarah.

As I grew up and faced the normal teenage crisis about fitting in, Bowie stayed with me, he made me feel like my weird clothes and general kookiness was ok, with his “book of rules, of what to say to people when they pick on you, cos if you stay with us you’re gonna be pretty kookie too”, even when I was being bullied for it. F*** them, they didn’t get it. My best friends loved Bowie too, and we sparkled together, singing loudly in each others suburban bedrooms, which was cool because Bowie was born in surburbia and he was a god. 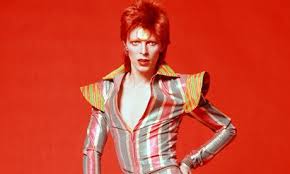 Bowie was there when I spotted my first boyfriend at a party wearing Bowiesque eye make up and glittery clothing – not a popular look in 1995, but I instantly knew he was right up my street and I went out with him purely because of this. We spent hours smoking weed and playing records, Aladdin Sane, Heroes, Ziggy stardust and even the new stuff…like Outside. I even have Bowie to thank for my terrible exam results. When my heart got broken for the first time, Bowie was there “it’s a god awful small affair…. To the girl with the mousey hair”. That voice. It twists a knife in my heart just thinking about it.

Today there has been an incredible outpouring of grief on a ginormous scale, world wide. Before breakfast, both my older bros had texted to commiserate. People who don’t normally react with personal sadness to a famous death, feel personally affected. I’ve got my Bowie Tshirt on, and listening to Shaun Keaveny on BBC radio 6 dealing with this thunderbolt this morning, so beautifully, has, I’m not ashamed to admit, made me cry. Because like so many of us, I’ve lost someone I grew up with.

There are so many musicians who’d never have existed without Bowie. Janelle Monet, Lady Gaga, the Cure, Pulp, 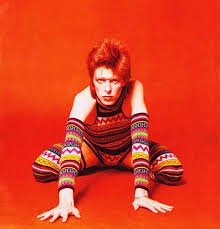 Franz Ferdinand to name just a few. But pretty incredibly, Bowie has also been relevant to kids today. I’m so proud to say that my 7 year old niece cried today at the news of his passing.

Bowie never got old, he changed with us, so we never had to move on. He was always on the cutting edge. He never became an over exposed twat like some rock legends do, and unlike his peers Mick Jagger et al, he refused a CBE, saying it was not what he was working for. He kept creating, kept provoking a reaction, kept growing as we did. What a perfect goodbye Lazarus is, absolute class. Goodbye Bowie. The stars look very different today.